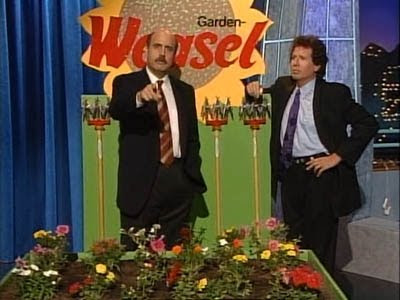 The show hit the ground running with its first episode, "What Have You Done for Me Lately?" (According to the episode's commentary track by Garry Shandling and Peter Tolan, the episode's writer, this was actually the sixth episode filmed.) The creators of the series were confident enough to dispense with introductions to the characters. The essential traits of the characters became evident without any clumsy exposition. The look and feel of the series also became clear with the first 'walk and talk,' which followed Larry and Artie's conversation as they walked down a hallway right after the talk show finished taping.
Here's some exemplary dialogue from the first episode:

Melanie (Vice President of Programming): Our number one problem, mathwise: lost viewers equals lost advertisers equals lost revenues. What do we do to keep our advertisers happy -- other than give them free handjobs? Now, Larry, we've talked to some of your sponsors. We've asked them what we can do for them. It's come back to us this way: They want you to do live commercials as part of the show. They want it -- that means we want it.
Sheldon (President of the network): You can see how this would help us.
Larry: Well, uh, you know, knowing the sponsors the way I do, I just think they would respond more to the handjobs. But, you're asking me actually to do live commercials?
Melanie: You have a problem with that.
Larry: No, I just ... My only concern would be the style of the show that we've established over the years and it ... I'm not sure that the live commercials would mesh with that style.
Melanie: You don't want to do it.
Larry: No, I didn't say that. Uh, Artie?
Artie: Melanie, I'd like to jump in if I might. Oh, that's a lovely thing you have at your neck, by the way. I think what Larry's trying to say is that we have no real problem with the live commercial concept.
Larry: Absolutely not.
Artie: It's just a matter of finding the right man for this job. Now I don't know if you know, but Hank Kingsley does a hell of a lot of fine commercial work. He does the adjustable bed. He does the medical alert necklace. He does, uh, --
Network executive: Arthur, excuse me. Melanie, if I may?
Melanie: Mmm hmm.
Network executive: The thing is ... Hank does too much commercial work. He's way overexposed. His saturation level is very high.
Larry: Gee, I don't think that's true.
Network executive: He's doing the Green Giant spots.
Larry: Is that Hank?
Network executive: You can't really tell because you only see him from the knees down. But, uh, he's the new Green Giant.
Larry: I didn't know that. Hank's the fucking Green Giant?

In this one scene, we see several recurring elements of the show:
Eventually, Larry does three live commercials for the Garden Weasel:
Posted by the enthusiasts at 3:01 PM No comments:

12b. The Larry Sanders Show 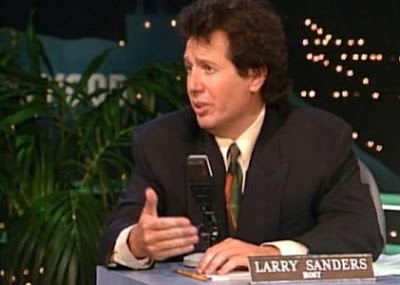 The Larry Sanders Show became a template of sorts for other handheld comedy-of-awkwardness shows (e.g., The Office). The characters are a pretty unlikeable bunch. They tend to be petty and narcissistic -- and riveting. Larry, the talk show host, is self-obsessed and neurotic. (That said, he's more 'normal' than either Leno or Letterman, both of whom are monumentally fucked up. Don't believe us? Read the Bill Carter books we mentioned yesterday.) Hank, the sidekick, is self-obsessed and clueless. (He's even chastised at one point for nodding off mid-episode.) Artie, the producer, is show-obsessed and intense. He also pours a kickass salty dog.
Frankly, we can't easily explain why we like the show so much. Sure, the characters are great. (The one character who comes to mind as being too cartoony is Darlene, Hank's personal assistant. According to imdb, the actress playing Darlene, Linda Doucett, 'lived with Garry Shandling from 1987-94. When they broke up, she filed charges against him for sexual discrimination and sexual harrassment.' Jesus. Why did we have to read that?) Yes, the writing and acting are exceptional. And the show has some unbelievable cameos (e.g., David Duchovny as David Duchovny -- it's one of his finest roles, and, no, we're not kidding). The Larry Sanders Show rewards repeat viewing and sometimes startles you with its humour, its sadness, or its honesty.
If you're wondering what happened to Garry Shandling in the years after The Larry Sanders Show, we'd recommend reading the GQ article The Comedian's Comedian's Comedian, which was published in August 2010.
Posted by the enthusiasts at 8:18 PM No comments:

12a. The Larry Sanders Show 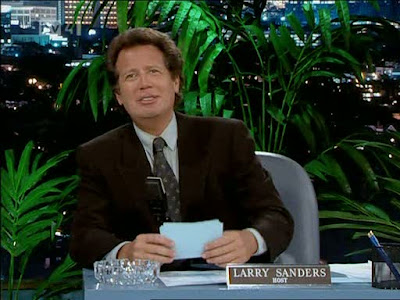 A few weeks ago, we read the book The War for Late Night (2010) by Bill Carter. It does a good job of untangling the knots of the recent late night Coco v. Leno fiasco. It's also pretty entertaining. We'd previously read Carter's book The Late Shift (1994), which was about why NBC had chosen Leno over Letterman as Carson's Tonight Show successor. The War for Late Night mentions that Garry Shandling was NBC's top choice to succeed Letterman when he jumped to CBS. They even offered him a substantial fee to host the show -- $5 million/yr, if memory serves -- unlike the much smaller sum they later offered Conan. Shandling thought about the offer and eventually declined.
It's telling that Shandling would reject a massive amount of money to host an established late night show on NBC in order to helm The Larry Sanders Show, a TV series he co-created that was broadcast on cable network HBO (remember, this is HBO before Oz, The Sopranos, and The Wire) that portrayed the egotistical assholes who run late night shows.
We first happened upon The Larry Sanders Show in September 1997, when a six-hour marathon of the show aired during the launch of a new TV channel called VTV (Vancouver Television). We'd heard plenty of good things about the show and even taped the full six hours on a VHS tape. We watched those episodes repeatedly and tracked down as many other episodes as we could. (This was eight years before YouTube existed.)
Recently, we acquired the just-released complete series box set (17 discs!) from Shout! Factory. (A few years ago, we received the four disc set Not Just the Best of Larry Sanders as a great gift.) We've been rewarding ourselves by doling out episodes irregularly rather than devouring them all in a short span, which is our usual pattern. (We're currently in the middle of Season Three.) Garry Shandling is a fucking genius, right?
Posted by the enthusiasts at 7:21 PM No comments:

Our latest plan is to focus on a single topic for an entire month. Actually, this was our original idea when we conceived of EOTM several years ago (2003? 2004?). Why don't we try it out for a while and see where it gets us?
Posted by the enthusiasts at 7:18 PM No comments:

Yes, we haven't posted for a couple of months. But we did start another blog recently, Song of the Moment, which we have been posting to with surprising regularity.
Plus, we've got an idea for how to change the format of EOTM. Things would change somewhat, but not that much. Make sense? We didn't think so. Maybe we'll try to explain tomorrow.
Posted by the enthusiasts at 7:45 PM No comments: 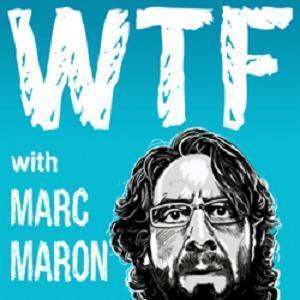 At the moment, we have 1747 unlistened-to podcast episodes waiting for us in iTunes. It would take over 50 days of listening (24 hrs/day, 7 days/wk) to hear them all. We need to prioritize, to put our ducks in a row. For the past several months, WTF with Marc Maron has been one of our favourite podcasts. It took us a while to warm to Marc's intense, personal monologues that open each episode. (Idea for a drinking game: Imbibe every time Maron says "What's wrong with me?!") We also didn't initially love his tendency to focus on himself during interviews. Now we can see that by talking about himself Maron (inadvertently or not) encourages his guests to talk about themselves -- and it works.
How we discovered WTF with Marc Maron:
We don't remember. Maybe it was through The Sound of Young America (still probably our very favourite podcast). Maybe it was an interview Maron did with the Onion's AV Club.
Why WTF is worth a listen:
If you like comedy -- particularly stand-up comedy -- you'll like WTF. (The lion's share of Maron's guests are comedians.) If you don't like comedy, you might still like the show. No promises, though.
Maron has been a stand-up comic for about 20 years, so the dynamic when he's interviewing another comedian is unique. It's essentially a conversation between peers. The fact that he's willing to talk about his insecurities and flaws often means that his guests do the same. It's particularly interesting when he has a guest on the show who he's known for a long time. His two-hour chat with Louis C.K. -- who was once Maron's roommate -- was fascinating. They had been good friends, then some shit came between them -- Maron was jealous of Louis' success, Louis felt that Maron had not been there for him when his marriage ended and his TV show Lucky Louie was cancelled, etc. -- and they talked quite openly about this shit on the air.
To our ears, WTF has one of the best hosts out there, features fantastic guests, and is updated with surprising regularity (hour-long episodes are generally uploaded twice a week).
Here's the first part of his interview with Louis CK:

Recommended viewing:
Obviously, we've been really into stand-up comedy lately. Here are two really good documentaries about stand-up we can recommend:
Posted by the enthusiasts at 8:19 PM No comments:

The original idea was to write a post a week for a year. 52 posts in 52 weeks. So far, we've added 10 posts in about 68 weeks. It's kinda like that poem "The Shadow People" by Auden: "This is the way the world ends, world ends, world ends / Not with a flood but a trickle." (If we're not mistaken, that poem might be where the band Shadowy Men on a Shadowy Planet found inspiration for its name. We particularly like the SMoaSP album Dogs Go On With Their Doggy Life.)
Posted by the enthusiasts at 8:05 PM No comments:

the enthusiasts
Vancouver, BC, Canada